BLOWBACK: The Massacre in Maguindanao 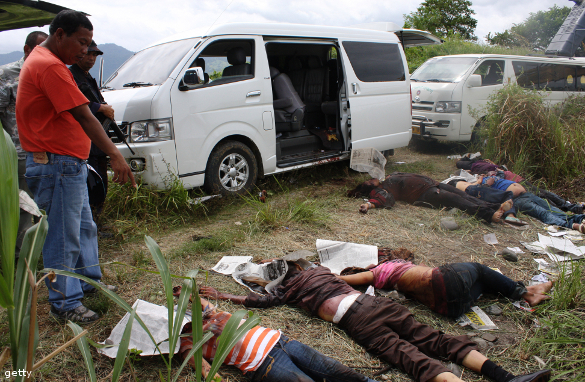 The Massacre in Maguindanao in the Philippines

You can’t escape the laws of physics.  Newton’s third law of motion states: “for every action, there is an equal and opposite reaction.”  In the world of governments and their security forces, it’s called blowback – a term first coined by the US Central Intelligence Agency in classified documents to describe US and British covert operations in Iran in 1953.  They helped overthrow the government of Mohammed Mossadegh, setting in motion a chain of events which inspired the revival of Islamic fundamentalism around the world.

Blowback happened again in Afghanistan in the late 80’s when the US funneled more than $3 billion, through Pakistan’s intelligence service, ISI, to build up the Afghan resistance against the Soviets.  That sowed the seeds for 9/11 and the major terrorist attacks in Southeast Asia from 2001 to 2009.  Among the key beneficiaries was Abdul Rasul Sayyaf, who helped train Osama bin Laden and thousands of Southeast Asian militants including the founder of the Abu Sayyaf in the Philippines, some of the Bali and JW Marriott bombers.

Blowback happened in Maguindanao in the southern Philippines – where warlords with private armies funded by the state wield political power.

It’s a complex situation: the power structure of government is a thin overlay on top of a complex social hierarchy based on families or clans.  These clans periodically clash – feuds known as rido, which can be ignited by the flimsiest of reasons – a quarrel over women or a verbal slight.  Clans became the foundation of electoral politics and determined the distribution of power and resources.

He gained even greater power after he helped Gloria Macapagal- Arroyo win the 2004 presidential elections.   She won by such a large margin in his areas of influence, including all the votes in three Maguindanao towns, that her victory became suspicious.

The military has its own term for members of this private army: Civilian Armed Force Geographical Units or cafgus.  These are men who are paid by the local government and trained by the military – all deployed under the command of Ampatuan.  Unofficial estimates of the men under Ampatuan’s command reach 800, including cvo’s and cafgus.

Reports of violence, abuses of power, and murder increased through the years, but little was done.  People were too afraid to speak.  Shortly before the 2001 elections, one of his political rivals was murdered inside a restaurant.  Ampatuan was the primary suspect and was even charged, but nothing happened.  In another instance, police said the nephew of a rival was killed with a chainsaw.  The body was never found.  Another rival was burned alive.  In every instance, suspicion fell on Ampatuan, who created and exploited a culture of impunity.

Blowback.  In biblical terms: “we reap what we sow.”