The future of journalism in the world's most dangerous place for journalists: 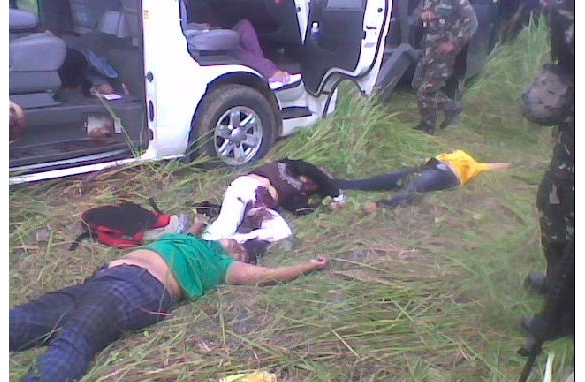 A citizen journalist called “patroller” - believed to be one of the first people at the scene of the Maguindanao massacre – sent this photo to the media.

57 people killed in broad daylight, 30 of them journalists.  It was premeditated murder because even before they were ambushed, their graves were dug.  It was the worst election-related violence we have ever seen and the deadliest single attack on journalists anywhere around the world.

This is a story about the courage of one anonymous Filipino – a citizen journalist – who risked his life three times on Monday, November 23 to tell the world about the massacre in the southern Philippines.  His courage gave the world the first photograph of the carnage released to the public.  It also shows how professional journalists and citizen journalists can work together to circumvent fear, prevent a whitewash and get the Truth out.

ABS-CBN’s citizen journalism program began during our 2007 elections.  We called it “Boto Mo, I-Patrol Mo.” Translated it means, “Patrol Your Votes.”  It was the first time globally that a broadcast media organization used the power of mass media and combined it with mobile phone technology and new media for a political purpose: to help ensure elections are free and fair.

It’s important in the Philippines because our elections have always been plagued by rampant cheating and violence.  The Philippine National Police declared the 2007 elections the most peaceful in our history – with only about 130 people killed in 217 incidents of poll-related violence.

It’s all relative isn’t it?  But this is what we live with.

Our culture in the Philippines is more passive than our western counterparts because of a history of feudalism and patronage politics.  It’s left most of our people believing they have little power to effect change.  So for 2010, we pushed to encourage personal empowerment and responsibility – “BOTO MO, I-PATROL MO: AKO ANG SIMULA” (Patrol Your Votes: Change Begins With Me).

Our May 2010 elections are particularly important.  It’s the first time ever that this country will try automated elections.  It’s historic, yes, but it also means that those who are used to cheating in elections will now have to find new ways of manipulating the ballots.

That uncertainty along with a culture of impunity in parts of the Philippines where political warlords command private armies created a combustible mixture that led to the massacre – in broad daylight – of nearly 60 people, including 30 journalists.  All sparked by one man, Esmael “Toto” Mangudadatu, who decided – for the first time ever – to challenge an Ampatuan for the office of governor.  The Ampatuans have held power in Maguindanao since 2001 and have run unchallenged in every election since then.

Mangudadatu was warned that if he filed his certificate of candidacy, he would be killed.  So he sent his wife and two sisters, along with female lawyers and 30 journalists.  He believed his rival would not attack women.  He believed journalists would be safe.  He was wrong.

As we journalists were confirming exactly what happened that dreadful Monday, a citizen journalist – whom we call a patroller – emailed us three times, first at 3:47 pm, again at 3:58 pm and finally at 8:48 pm.

Based on what we received, we believe this patroller was a member of the security forces, probably the military because soldiers were first on the scene, or a member of the Mangudadatu family.  At the time the picture was sent at 8:48 pm, they were the only two groups to have visited the site.

We believe this man (at this point only men had been allowed at the site) wanted to make sure there was no whitewash.  So he emailed us, hoping we would tell the world about it.  We did.

His first post said, “Maguindanao gubernatorial aspirant Toto Mangudadatu’s wife was kidnapped together with two sisters of Mangudadatu and media men as well as legal counsels.”

He then wrote that the security forces charged with maintaining law and order – the Philippine National Police or the PNP and the military (in this case, the 6th Infantry Division) – actually allowed this to happen.  He told us why, and he told us who was behind the kidnapping.  He wrote: “The PNP were immobile because they were under the command/control of the incumbent Maguindanao government – Ampatuan family.  The 6th ID army have played dumb and blind despite heightened reports that there is a plot against Toto Mangudadatu.”

He emailed again eleven minutes later, this time asking for an impartial investigation because “the atrocities of Ampatuan family in Maguindanao is a secret public knowledge.  All are immobile for their fear of life.  These people are playing gods here.”

Nearly five hours later, he emailed a photograph – the first of the gruesome crime scene.  The photo seemed hastily taken because it was a badly framed picture of bodies in front of a white van – the kind of photo you could discreetly take from a cellphone camera held below the waist.  Two soldiers are at the periphery of the shot.  At that point, professional journalists had been prevented from visiting the site.  In fact, our reporter, Lerio Bompat, would be the first journalist to arrive at the scene and send a photo – more than twelve hours later.

On that first day, no one knew what would happen nor the extent of the crime.  Shortly before we received the photograph from our patroller, the military said it recovered 21 bodies from the site.  The military spokesman confirmed what our patroller wrote us hours earlier –  that members of the police as well as local government officials, including Mayor Andal Ampatuan, Jr. were allegedly part of the group which carried out the massacre.

At that point, everyone in Maguindanao was shocked and frightened.  It would be days before others would voice what our patroller had written.  On the day of the world’s single deadliest attack on journalists, we have a picture of our future with citizen journalists – people who are no longer disinterested nor objective but who have everything at stake.

The reality is that if this patroller had been caught by Ampatuan’s men he would have been killed.  Yet, he took the risk and told a compelling story about the breakdown of law and order in a community ruled by fear.

A week after the massacre, our citizen journalists – our patrollers – remain unusually agitated and uncharacteristically angry.  The call for justice is palpable.  On phone, via text messages and on email, they sent dozens of tips.  Hundreds clamored for retribution, and demanded death for the killers "by firing squad," "by electric chair," "by hanging."  One patroller was unusually cruel: "we want to chop him up alive into 57 pieces to be given to the families of his 57 victims."

As we condemn and mourn the deaths of our colleagues, we know the Truth will emerge.  Now we journalists have help.