What’s next for women’s rights in the Middle East? 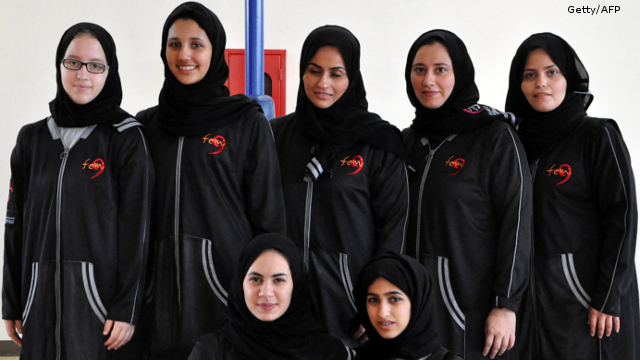 What’s the next phase for women’s rights in the Middle East?
I think that is the key question we are all looking at as we see these unfolding democracies in former dictatorships where Islamists are now the rising powers. The most important gauge of this will be whether women’s rights will be enshrined in the new constitutions, along with other minority rights. Will women who took very prominent parts in taking down the dictatorships, get the rights that they sacrificed and risked their lives for in countries such as Tunisia, Egypt, Libya and today in Syria? One of the most important things to recognize is that for decades the UN reports have explained why the Arab and Muslim world is far behind despite it’s natural resources: there’s a lack of freedom,  democracy, but most important there’s a lack of women’s participation.

Have western women been helping their counterparts in the Middle East?
Nancy Pelosi – one of the most powerful women in the U.S. – recently visited Egypt, Tunisia and Libya and made no bones about standing shoulder to shoulder with women and saying that women deserve and must have full rights – not just because that’s right, but the parity and equality makes for a much healthier society.

Would you say women have actually lost rights in the Middle East over the past few decades? I ask you that because you once showed me pictures from 30 years ago of women in Afghanistan wearing miniskirts – that’s certainly not something we see there today.
I would say that during the late 1970s, when fundamentalism swept Afghanistan and Iran, women’s rights were set back very significantly. And it’s not just about miniskirts – that was only a certain class of people in the capital. But what was an issue in places like Iran was that while women actually gained social rights, they lost legal rights. Suddenly women became more socially empowered – they could go to school, work and be voted into office. Their fathers could no longer say this is an infidel regime because it was now an Islamic Republic. But at the same time women’s legal rights were delivered deep setbacks – property, custody, and divorce laws for example. In today’s Iran a woman’s word in court is worth only half that of a man’s. So in social matters women made strides, but in legal matter they lost the rights they had been given under the Shah in of Iran.

Overall women have been treated as second-class citizens in North Africa and Arab countries and that has weakened those countries.

What about the future of women’s rights in Afghanistan?
Women had literally been treated like dirt beneath men’s feet under the Taliban and now they’re able to go to school and work – since al Qaeda was banished by the U.S. and particularly after the Taliban was defeated post 9/11. The Afghan constitution even decreed women’s rights. And some 25% of the lower house of parliament has seats that must be reserved for women. That’s affirmative action, but it’s right.

But now people in Afghanistan, particularly the women, are very concerned that when the U.S. pulls out (which Obama has committed to) that the first people to pay the price will be the women.  They’re afraid the Taliban will come back and women will be treated like chattel again. That’s why the U.S. and others have to insist that any peace deal with the Taliban does not come at the expense of Afghan women.

What would most surprise people in the west about women in the Middle East?
I think many perhaps see women in that region as meek, docile and disinclined to partake in democracy – nothing could be further from the truth. Even the women being denied their rights and proper place in society are the backbone of society in that part of the world; they have huge influence.

It has been said many times: if you educate a woman, you raise a whole village. That’s because an educated woman will teach her children the best path to the future.

A woman who’s given a small loan by a micro-credit company will get a better return than a man – it’s proven. They not only pay back the loans but they create small businesses and gradually lift up their whole family. Time and time again women have proven themselves to be great bets for investors in the developing world.