The U.S. election and the price of sitting out Syria 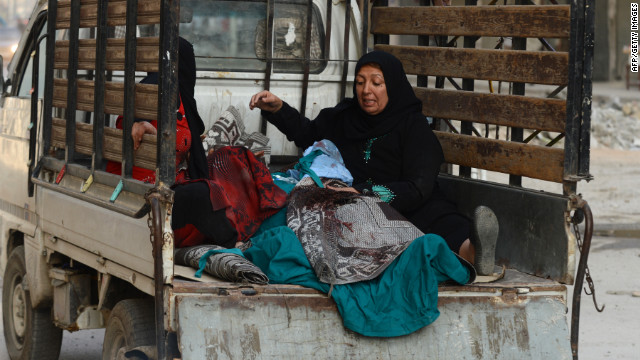 An injured Syrian woman rides to a hospital after an airstrike by regime forces in Aleppo on Tuesday.
October 16th, 2012
11:48 PM ET

This is part of a series on foreign policy issues Christiane Amanpour is analyzing in the-lead up to next week’s presidential debate on foreign affairs.

For the last 19 months Syria has fallen deeper and deeper into civil war. What started in March 2011 as another offshoot of the Arab Spring, the demand for freedom and reform, was met so brutally that ordinary Syrians decided that Assad had to go.

Left to fester, with the United Nations deadlocked over how to end the fighting, the death toll has reached 29,000 according to the Syrian opposition, and the most horrific massacres of women, children and old men have taken place. Extremists and foreign jihadists are joining the battle. With 1.2 million people displaced, the approaching winter poses as much of a threat as the relentless violence.

As worrisome as this is, recent history has shown us that when people are battling for survival, they end up taking help wherever it’s offered. When I covered the 1990s genocide in Bosnia, the people pleaded for years for the West to help. They did not. Instead the U.N. imposed a similar arms embargo that only ensured the superiority of the better-armed. So all sorts of foreign Mujaheddin came in. The parallels are eerily similar in Syria.

Will whoever wins the U.S. election make any changes to this policy of ‘Sitting Out Syria?’

U.N. still has no plan for Syria

Up until now, President Obama has said that his administration will only provide the Syrian opposition with non-lethal support. The Administration says it doesn't want to add fuel to the raging Syrian fire.

But all these months later, the decision to sit on the sidelines is causing unwanted blowback. The wrong fighters are getting even those small arms that are being sent by Arab countries, the New York Times now reports.  It also reported that the United States has asked Arab partners not to provide the heavy anti-tank weapons, nor the missiles the rebels need to down Assad’s attack jets and helicopters.

My reporting and interviews with world leaders leads me to the conclusion that the United States never intended to get involved, with or without Russian or Chinese agreement at the U.N.. After all, this is a U.S. election year and President Obama is focused on ending wars, in Iraq and Afghanistan, not getting into a new one in Syria.

But the policy of providing non-lethal aid, such as communications equipment, training and humanitarian aid, is not working.

Without U.S. leadership, other leaders in the region say they cannot take the lead. The prime ministers of Turkey and Qatar both told me they would have helped with much stronger action, such as safe areas for the Syrian opposition and a no-fly zone for the Syrian military, if the United States were on board.

Qatar's PM: 'We have a Plan B for Syria'

Were he president, Romney says, he would “work with our partners to identify and organize those members of the opposition who share our values and ensure they obtain the arms they need to defeat Assad’s tanks, helicopters and fighter jets.”

This goes further than what the Obama administration has said, by ensuring a whole new weapons pipeline would open at least to parts of the Syrian opposition.

When it comes to Syria policy there is a difference between Romney and Obama.

Romney has openly said in a speech what Obama hasn’t said: The rebels should be armed with heavy weapons, to defeat the Assad regime.

Again, Romney’s statement was short on specifics, and like President Obama, Governor Romney is not talking about U.S. or NATO airstrikes, nor a no-fly zone, nor a safe area to be carved out in Syria. And neither the President nor Governor Romney has ever talked about putting boots on the ground there.

However other Republicans have taken a stronger position. Senator John McCain has repeatedly said he wants Washington to arm the Syrian rebels and make a safe zone inside the country. McCain has even gone as far as saying there should be airstrikes. Just this week he, Senator Joe Lieberman and Senator Lindsay Graham renewed their calls to arm Syria's rebels.

Iraq and its role in Syria

The only question now is whether there will really be a change in the U.S. position after this election.

The war is now spreading outside Syria’s borders with fire and counter-fire between Syria and neighboring Turkey.

And hundreds of thousands of Syrian refugees are straining the capacity of Turkey, Jordan, Iraq and Lebanon.

Sitting out this war, experts say, could leave the U.S. without allies in Syria when Assad falls, unable to shape the future, and facing a generation that will grow up embittered by the fact that in the Syrian people’s direst hour, the United States sat back and watched the slaughter.

Assad's lifelong friend: 'The crisis has changed him'