Indian rape debate: Why death penalty is no solution 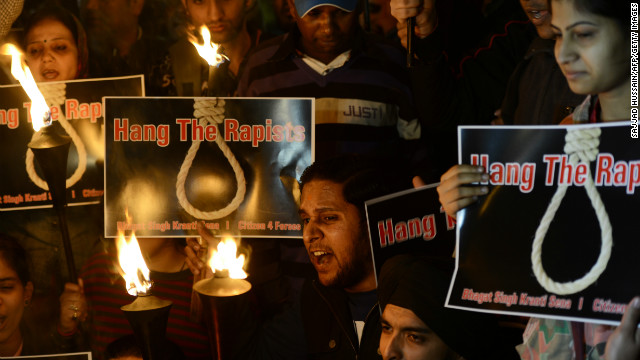 After the gang-rape and murder of a student in New Delhi, many Indians want the death penalty to be introduced for rapists.
January 3rd, 2013
02:22 PM ET

By Ananth Guruswamy, special for CNN

Ananth Guruswamy is director of Amnesty International in India. As the organization's chief campaigner, political advisor, strategist and spokesperson, he leads efforts to end human rights abuses in India and the region.

New Delhi (CNN) - The tragic case of the 23-year old woman who was brutally attacked, raped and left for dead by six men in New Delhi on December 16 has highlighted the unacceptable reality millions of women in India are facing. Violence against women is endemic - more than 220,000 cases of violent crimes against women were reported in 2011 according to official statistics from the Indian government, with the actual number likely to be much higher.

If there has been a silver lining to this horrendous case, it has been the enormous outcry from Indian society. What started as student-led protests in New Delhi has grown to encompass Indians from all walks of life and from the whole political spectrum. Tens of thousands have taken to the streets with the clear message that something has to change, and that women should no longer have to live in fear. <<READ FULL ARTICLE>>