Syria deal must be backed by force, Hollande tells Amanpour 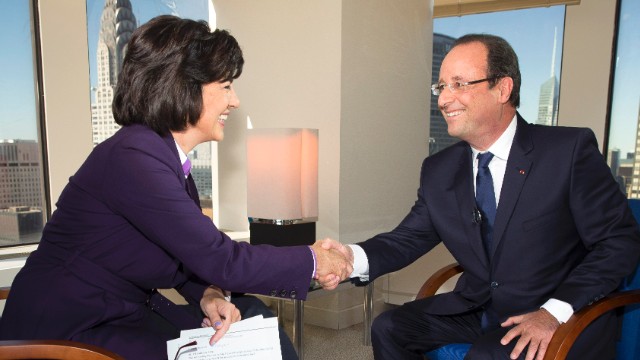 Hollande on Kenya, Mali and Kenya

Coercive force must be on the table in any deal for Syria to give up its chemical weapons, French President Francois Hollande told CNN’s Christiane Amanpour in an exclusive interview on Tuesday in New York.

A resolution that “would not consider any breach” by the Assad regime in destroying its chemical weapons would have “no scope” and “no punch,” he said.

“So France is looking for a resolution that must be binding, enforceable, so that in case of a breach we can go back to the Security Council and allow it to take sanctions,” President Hollande told Amanpour through an interpreter.

President Hollande has given France an unusually active and interventionist role on the world stage.

It was largely France and the United Kingdom that led the charge to intervene in Libya, and at the beginning of this year French troops entered Mali to stop Islamist rebels from taking over that country.

“The role of France is not to apply its ambitions all around the world,” President Hollande said. “We have no intent of influencing or defending commercial or trade interests. What we are fighting for are rules, principles, values.”

Therefore, he told Amanpour, “it is urgent that we act” on Syria.

“Of course it is about fighting the use of chemical weapons, as will be done at the Security Council anytime soon,” he said. “But it is also about finding a political solution.”

Skeptics of the Russian-led deal for Syria to rid itself of chemical weapons say that it is a tacit endorsement of President Assad’s continued rule. President Hollande dismissed this.

“It cannot be an opportunity for Bashar al-Assad to stay as the leader of Syria,” he told Amanpour.

Diplomats are hoping to advance a wider political solution to the fighting in Syria at a second round of talks in Geneva, dubbed in diplo-speak as ‘Geneva II.’

The new, more moderate president of Iran, Hassan Rouhani, has expressed interest in helping to broker a deal in Syria.

Most experienced diplomats agree that no tenable solution is possible in Syria without the participation of Iran, which has wide-ranging influence.

“Iran can attend the conference if that country agrees to the necessity of finding a political solution,” President Hollande said.

The purpose of the conference, he said, is to build a framework under which Bashar al-Assad steps down and a “Syria of tomorrow” is built that represents all political groups.

“If Iran agrees upon that goal, Iran is welcome,” President Hollande told Amanpour. “On the other hand, if Iran wants at any price to keep the regime in place, I cannot imagine how this country could attend Geneva II.”

Iranian President Rouhani has captured the world attention, as he advanced one overture to the West after another, from releasing political prisoners, to wishing Jews a happy Rosh Hashanah, to indeed offering to help broker peace in Syria.

Western officials have been approaching the new leader with cautious optimism, encouraged by his words but anxious for actions on what to them is the key issue: Iran’s nuclear program.

“When I see him today,” President Hollande said, “I will be telling him a simple thing: If Iran is willing to negotiate to give up its military nuclear program, and get a civilian nuclear program to be accepted, then there is a possible solution.”

“On the other hand,” he continued, “if the deadlock remains, what will happen? More and more sanctions, more burdens for the Iranian economy, and at some point the threat of an operation.”

Despite Iran and Syria being the overriding issues at the U.N. General Assembly, the brazen terrorist attack by al-Shabaab on a shopping mall in Nairobi, Kenya has pulled the world’s attention.

Two French nationals were killed in that attack, President Hollande said, adding that “we stand by all the victims.”

“We have to keep fighting terrorism,” he said. Referring to France’s intervention in Mali, he said, “We showed there that when we have a coordinated action, a resolute action, when we have the support of the African forces for the Sahel, we can succeed.”

He said that he believed al-Shabaab was “on the decline” in Somalia, at it was precisely for this reason that they attacked Kenya, which has “been active” in fighting the terrorist group in Somalia.

Finally, in the midst of huge international stories, German Chancellor Angela Merkel was elected to another term.

“France and Germany have a special responsibility in Europe,” President Hollande said. “Even though we have some different political backgrounds, we certainly want Europe to be at the forefront.”