Amanpour: Why Rouhani may be different 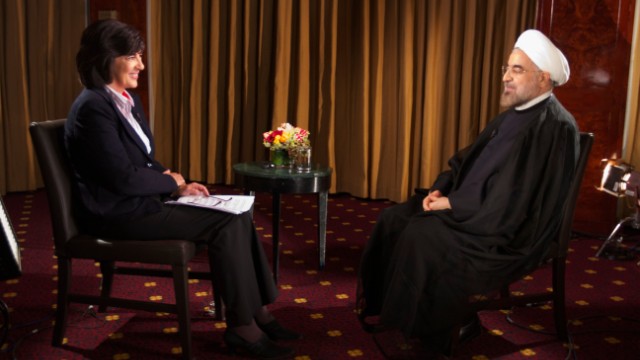 Hassan Rouhani is the fourth Iranian President I have interviewed, and each time these discussions seem to come at crucial times.

I was struck by the fact that he agreed to say a sentence or two in English to reach the American people in their own language, saying he was bringing peace and friendship from Iran.

I recall the huge excitement there was the first time when the first reform president, Mohammad Khatami, sat down with me and delivered what many called his manifesto for moderation: change and freedom … that was in 1998.

Like Rouhani, he too was the “mullah with a smiling face” and spoke words on CNN that truly changed the tone of the country’s relations with the rest of the world.

But soon it was clear that Khatami did not have the mandate from the Supreme Leader Ayatollah Khamenei, and hardliners quickly swept away his reforms, and people’s hopes. The brief Tehran Spring withered and died.

I asked Rouhani: What would be different this time?

I was particularly interested in Khatami’s op-ed in the Guardian newspaper this week, reminding the West of what happened to him, and warning that Rouhani’s election represents a real, if narrow window for real diplomacy. He said while he did not have the mandate from Ayatollah Khamenei, Rouhani does. And if Rouhani goes back empty-handed, that window will close.

I can certainly never forget President George W. Bush’s infamous Axis of Evil speech, which ushered in the harsh period and policies of Mahmoud Ahmadinejad.

It was here at the U.N. exactly eight years ago that Ahmadinejad gave his first TV interview, to me, and announced to the world that Iran was going ahead with its nuclear program.

He projected a belligerence and a deliberate antagonism in that interview that continued throughout his eight years in office. I recall telling Ahmadinejad that he sounded very aggressive.

So Rouhani’s arrival here in a blizzard of friendly tweets is very different.

Just the fact that he was elected in June, and the authorities let the vote stand, was a surprise and a change.

Before he arrived, he announced he was bringing Iran’s only Jewish M.P. in his delegation; this was after the Rosh Hashanah New Year tweets.

In his U.N. speech, he eschewed Ahmadinejad’s revolting anti-Semitic hate speech. Rouhani never once mentioned Israel; instead he recited a verse from the Torah.

And in my interview I asked him point blank about Ahmadinejad’s threats and Holocaust denial. His answers are instructive and again signal to me a desire to change tone.

But is this just a change of tone and style? We’ll see.

My hunch is that Rouhani, and his team – several are American educated – know that it’s now or never. They tell me they are prepared to negotiate, but as one veteran of the team told me, they are not prepared to “give diamonds for peanuts.”

They told me that their formula is full transparency and confidence building over the nuclear program in return for “proportional reciprocity” in sanctions relief.

I assume the U.S. and the West do not want to go to war with Iran over the nuclear program – President Obama said at the U.N. yesterday that he’s not after regime change in Iran. So if diplomacy is the method of choice, it is of course a two-way street. It demands painful compromise from both sides.

Before I sat down with President Rouhani, I conducted an exclusive interview with French President Francois Hollande, who did meet with Rouhani, and I asked him about this.

AMANPOUR: And on the issue of nuclear program with Iran, where do you see the possibility of compromise? Can there be a win-win situation? Is this a last chance, do you think, for some kind of resolution of this crisis, really?

HOLLANDE: It's been ongoing for ten years. The negotiations have been in a deadlock for ten years. And each day, each extra day is an extra threat in terms of the answer that will come at some point. And we have to keep that in mind. The new president made a number of statements which are signs of opening development. And I think that here again, we have to hold him to his word. And when I see him today I will be telling him a simple thing. If Iran is willing to negotiate to give up on its military nuclear program and get a civil nuclear program to be accepted then there is a possible solution.On the other hand if the deadlock remains, what will happen, more and more sanctions, more burdens on the Iranian economy and at some point, the threat of an operation. We all are aware of that. So from that point, starting point, it is reasonable to find a compromise. So the Iranian president has to move from words to deeds.

There is no doubt where the vast majority of Iranian people stand: Squarely for moderation, reform, freedom and rapprochement with the west, INCLUDING the United States. Rouhani and his people know that. They also know that he must deliver on his campaign promise to relieve the economic hardship caused by U.S., E.U. and U.N. sanctions.