Hanks holds ‘mirror up to nature’ in “Captain Phillips” 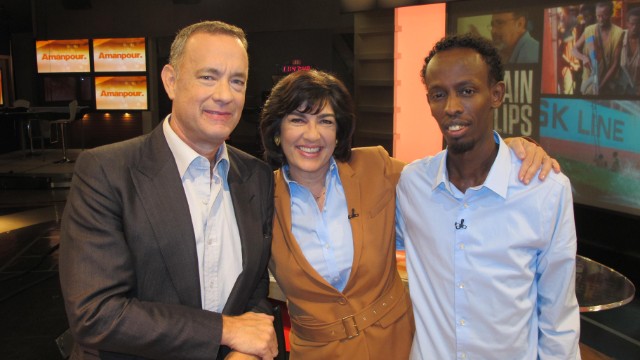 True story of piracy on the high seas

The Somali star of "Captain Phillips"

A U.S. raid on al-Qaeda-linked militants; the 20th anniversary of Black Hawk Down; a new film on the true-story pirating of an American shipping vessel – Somalia, the war-ravaged East African nation, finds itself in the news now more than almost any other time in recent memory.

The hijacking of an unarmed American ship by Somali pirates in April 2009, and subsequent commando rescue operation by U.S. Navy Seals, is the subject of “Captain Phillips,” a new movie starring Tom Hanks and first-time Somali actor Barkhad Abdi, and directed by Paul Greengrass.

CNN’s Christiane Amanpour spoke with all three in an interview that aired Wednesday.

“The best non-fiction is a record of human behavior that is always checkered, that is always very complex motivations,” Hanks told Amanpour in New York. “They do not hew to the antagonist/protagonist storyline which is the basis of any kind of dramatic art.”

On its face, the film is indeed about antagonist and protagonist – Somali pirates hold for ransom an American crew and their captain, Richard Phillips, forcing an intervention by the American military.

But reality, as Hanks told Amanpour, is often – and in this case as well – more complicated, as evidenced by the interaction between Captain Phillips and his four Somalis captors.

“In reality, there were laughs; there were jokes,” Hanks said. “There was a type of banter that went by – all at the same time Richard Phillips was convinced that [the] big guy, particularly, was going to shoot him in the head for no reason whatsoever.”

“That is a type of tension that brings out the most flinty, sharp-edged aspect of human nature,” Hanks told Amanpour. “And at the end of the day, I - that's my job. You know, I’ve got to hold the mirror up to nature.”

The filmmakers could hardly have known how relevant that mirror to nature would be when their movie premiered.

Terrorism – and vigilantism, lawlessness – in East and North Africa has come under worldwide attention, most notably with the spectacular attack on a Nairobi, Kenya shopping mall by al-Shabaab, an al-Qaeda subsidiary based in Somalia.

“One of the wonderful central threads of moviemaking is to tell us about the world, tell us where we sit,” Greengrass told Amanpour.

Greengrass sees as a particular success the film’s portrayal of Somali pirates as cogs in a well-organized criminal enterprise, not just independent vigilantes.

“You're talking about international organized crime,” he told Amanpour, “with its roots way away from the coast of Somalia, they lie in Kenya and Nairobi, in Europe and in some cases in the U.S.”

“There are corporations that have dropped by helicopter millions of dollars in cash,” he said. So “why would they settle for $30,000, where if they played this right they can get a couple of million?”

This hijacking of the Maersk Alabama was a front-page story for days in 2009; far from just retelling the story, Greengrass said, filmmaking can give the viewer a new perspective on the story.

“What a movie can do is put you on the ship,” he said. “If you can create a compelling portrait of the characters at the heart of the drama, and then if you can pack it filled with the details, the detail of what happened is what you can never get from the news, because it's fast-moving.”

A newcomer steals the show

Some of the most compelling characters of “Captain Phillips” are the Somali pirates, who were all but anonymous to the public at the time of the hijacking.

“I knew that we had to cast Somali actors to play these parts, but there’s no obviously Somali acting community in Los Angeles or New York,” Greengrass said. “So we went to Minneapolis, where the main Somali community in the U.S. is.”

Going into casting, the director was nervous about being able to cast actors who could play opposite Hollywood legend Tom Hanks.

When they got to Minneapolis, however, many hundreds of people showed up for casting, and Greengrass discovered that “that community is actually incredibly vibrant, incredibly creative, filled with musicians and actors and writers.”

The star they found was Barkhad Abdi, an immigrant from Somalia who had done no professional acting, who plays the lead pirate, Muse.

When he got the call saying he got the part, he told Amanpour, “I was just at my friend's house, just hanging out.”

He had shot some videos, he said – “music videos and such” – but never in front of the camera.

Now, as a Hollywood star, Abdi all but steals the movie.

In a riveting scene early in the film, Muse, having just boarded the Maersk Alabama, stands opposite Captain Phillips, AK-47 in hand, and points at his eyes.

“I'm the captain now,” Muse says, with a steely calm.

It’s a line that, as the climax of trailers running over and over, is almost already a cinema classic.

And as Greengrass told Amanpour, “there’s nobody more dangerous” than a young man with a gun who thinks he has nothing to lose.

“That was the first time we met,” Hanks says of the Somali actors. “Paul [Greengrass] had kept us separate.”

“We wanted to see Tom,” Abdi said. “Paul comes to us, I remember, and said, ‘No one's going to see Tom until the first scene of the film you guys are doing with him.’”

“I didn't get much sleep,” the night before he was to shoot the scene, he told Amanpour. “And when I came the second day, Paul come to me and say you have to own it. You have to take control. … I had no choice but to come to become that character.”

Greengrass put Abdi and his costars through a rigorous training regimen before filming – not only how to hold a weapon, fight, and stand still on a fast-movie boat, but even how to swim.

“Before the auditioning began, there was a lot of people around me even saying that this film will embarrass Somali people,” Abdi told Amanpour. “I did not look at it that way. It was a true story that had been. And I understood why these pirates are doing what they're doing. They are some desperate guys.”

Most of them, he said, are just young men that are being exploited.

Abdi told Amanpour that he still has family in Somalia – some whom he has met and some he hasn’t. He hopes, one day, to be able to visit them.

In the meantime, he has been catapulted from his home in Minneapolis to Hollywood stardom.

“If you can get past the self-consciousness of saying you're an actor and performing, the moviemaking racket is something you can figure out in a morning or an afternoon,” Hanks said.

“The other part of it, though, is a harder aspect, which is maintaining that characterization and being able to make believe in the most artistic sense,” Hanks continued. “These guys have it in their DNA. They were not intimidated by anything. And they were very, very well prepared for this. They had worked for weeks. So they came in pumped.”

So what, Amanpour asked, will Abdi do now?