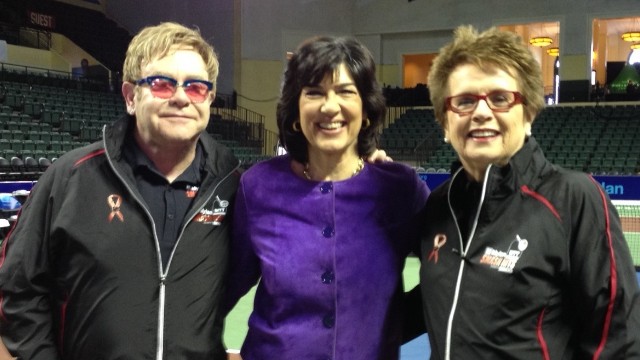 It was 1973 and King was at the height of her fame as the premiere female tennis champion. She asked the host of the event what the reason for the party was.

“And he goes, ‘Oh, it's for Elton John,’” King recalls. “And I about fainted, because Elton was my favorite, but I'd never met him.”

“I'm so old,” John said as King chuckled, “I started playing [tennis] with a wooden racquet and hitting a ball up against a wall.”

Billie Jean King and Elton John spoke with CNN’s Christiane Amanpour in an exclusive interview that aired on Tuesday.

They are two revolutionaries, two comrades in arms, and this year they have two very special anniversaries.

King was the queen of tennis. She swept Wimbledon, winning singles, doubles and mixed doubles titles - three of thirty-nine grand slam championships she would win over her brilliant career.

She was a blaze of activity on and off the court. That year she founded the Women's Tennis Association, bringing major change in a sport where women were second class citizens on every level.

That year she convinced the U.S. Open to award female champions the same prize money as men, for the first time ever; slowly, every other major followed.

And perhaps most famously, that year she played – and beat – Bobby Riggs, a former triple-crown winner at Wimbledon.

It was a massively hyped "Battle of the Sexes," which was so much more that a tennis match – women's equality, especially on the playing fields, rested on what happened across that net.

That same year, 40 years ago, Elton John was in the midst of an extraordinary run, on record, on radio, and on the road.

Forty years ago he released his iconic double album "Goodbye Yellow Brick Road," along with hit singles like "Crocodile Rock" and "Daniel.”

And of course it was the year the two met, forging not just a firm friendship, but a powerful partnership in philanthropy, raising hundreds of millions of dollars so far for equal rights and for HIV/AIDS causes.

The Battle of the Sexes

It sounds provocative – and it was meant to.

Bobby Riggs was an aging tennis great, vocally convinced that men were superior to women.

In a heavily promoted match, he and King met in a 1973 showdown, complete with a “sugar daddy” costume for Riggs and a sedan chair entrance for King – “She’d been copying me, right?,” John asked.

“For me, tennis was my platform, and what the King-Riggs match allowed was a platform for me to fight for equal rights and opportunities for boys and girls and women,” King said. “So this match, I knew, was a seminal moment.”

It wasn’t about the athleticism.

But had she lost, she admitted, it would have set back the cause of equal rights, which just a year earlier had received a massive boon when a law mandated that federally funded sports programs provide equal funding for women.

John not only watched the match, at a Los Angeles hotel, but screamed so loudly he lost his voice.

“I honestly knew that all men I knew in my life wanted her to win,” he told Amanpour,” because Bobby was so cocky and so arrogant.”

Both King and John were almost preordained to take the cause of equal rights head on.

And though King says she realized as young as 12 what her cause would be, John had a slower start.

“I didn't know anyone who was gay,” he said. “I didn't really do anything about it until 23 when I first had sex.”

The 1950s saw the first signs that post-war austerity was ending, and a new society was coming – his family got its first refrigerator and television.

“The Tea Party seem to want to go back to those days,” he told Amanpour. “They can have them. You know, because they were the worst, secretive, manipulative, horrible days where people just were too frightened.”

For King, enlightenment came from the very sport that would catapult her to fame.

“The question I asked at 12 about tennis is, ‘Where is everybody else?’ because everybody was wearing white shoes, white socks, white clothes, you know, white tennis balls in those days.”

“And that's really what we're talking about today.”

From then on, tennis would be a means to an end.

She may have had the drive to push for social change from 12 years-old, but that doesn’t mean the path would be easy.

She was married, but after gossip of an affair was circulated, she held a press conference, against the advice of her publicists and advisers.

She admitted to the affair with a woman, but said it had been over “for quite some time.”

That, King told Amanpour, would never had been the way she would choose to come out as gay.

“In the beginning, it wasn't a relief,” she said. “I thought, well, if I'm really going to be true to myself, then I need to do this. But I was outed. I wasn't ready. I think you know when you're ready. That's why I wouldn’t out somebody.”

Her husband, Larry King, didn’t at the time want a divorce, and she had already started seeing Ilana Kloss, the partner whom she would stay with to this day.

“Where I am musically and personally is kind of the same place: I'm very relaxed,” John said. “I think for the first time in my 66 years on Earth, I feel completely balanced.”

He and his partner, David, have been together 20 years.

They tried to adopt a child from the Ukraine, but “found it so difficult” that they “reconfigured.”

“I said, well, this child in Ukraine is trying to tell me that I can be a father. So I must follow this. We'll have our own child,” he said. “Up to that I was dead against it.”

John has a new album out, The Diving Board, and the song “The Ocean’s Away” deals head on with the passage of time.

“It's about the men and women in the First and Second World Wars who gave their life,” he said. “People have no idea, none of us have any idea of the horror that people went through.”

It stands in stark contrast, he contended, to some of the worst ills of modern society, and a focus of celebrity, not “the rights things.”

“I hate the celebrity that is around now,” John said. “The vacuous, talentless, horror show that they get paid millions of dollars for, when there are people who are teaching kids every day that are trying to scrape by and earn a living. It's a joke.”

PHOTOS: Elton John through the years

“We're out there every single day with our energy and we're going to make this world a better place, no matter if it's through tennis, through music, whatever, to try to help the LGBT community, just help humanity,” King says.

Amanpour spoke with King and John at the site of Smash Hits, their celebrity-filled tennis fundraiser.

John has caused some criticism for agreeing to perform in Russia, a country that has started a crackdown on its gay citizens.

“I’ve been going there since 1979 and I have had great times in Russia,” John said. “What's happening there is so awful. But I've been asked to go. People from the LGBT community over there have said please come. I don't want to abandon them.”

“You don't prove anything by not doing something,” John says. “Everything is about chipping away.”