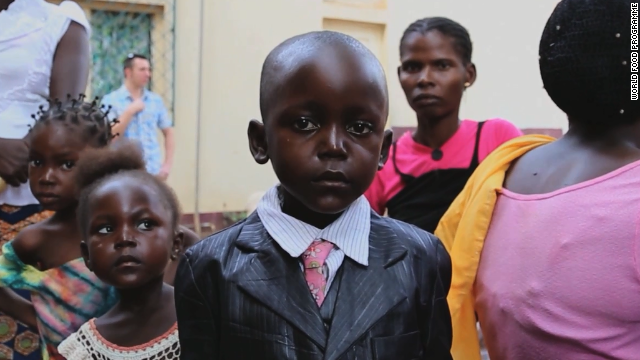 Ertharin Cousin is the Executive Director of the United Nations World Food Programme which is currently providing food assistance to 300,000 people affected by the crisis in the Central African Republic. She has just concluded a two-day fact-finding visit to the country.

People often laugh when I say I like to meet smiling, chubby babies when I’m out looking at World Food Programme operations in the field. But it’s true. A happy, healthy baby is the most obvious sign that we’re getting things right.

Unfortunately, there is no guarantee that we are going to get things right all of the time, everywhere in the world. The desperate situation I’ve witnessed these past few days in the Central African Republic shows the dangers of ignoring the warning signals for far too long.

It is not overstating the facts to say that C.A.R is teetering on the brink of a catastrophic humanitarian disaster. A political crisis aggravated the already fractious relationship between Christian and Muslim communities and exploded into inter-communal fighting that has driven hundreds of thousands from their homes.

In the past 48 hours I’ve seen the human impact of this tragic conflagration and it is etched on the faces of the children who have been innocently drawn in to a conflict being fought between marauding groups of young men, armed with machetes, knives and automatic rifles.

Too many have already been killed in this crisis, but the biggest danger stalking the young in C.A.R at the moment is malnutrition. At a health centre, just outside the capital, Bangui, I met two children who exemplified different sides of this evolving humanitarian disaster.

The first child, a young boy, greeted me with a smile as I arrived. He was like any other child of this age, energetic and engaging and his smile lit up the room. He was a walking, talking, living example of the positive impact of smart, nutritious, targeted food assistance. At the World Food Programme, we take pride in the fact that we are a global leader when it comes to saving lives in emergencies and this boy’s smile said it all.

But around the corner, slumped in another room at the health centre, out of the sun, I met 10 year old Dieu Ferra. Dieu was gaunt and there was no smile on his face. Looking at him, you would have guessed his age was no more than five or six, maximum. Because of his lack of access to nutritious food he appeared listless and unable to focus. It is easy to recognise the heavy toll he will pay for the rest of his life because of the irreparable damage resulting from a childhood ravaged by chronic malnutrition.

We all understand that life can be a lottery and there are few places in the world where the stakes against child survival are higher than today in C.A.R. But there is so much more that we could do to help ensure that children like Dieu have a better shot at life. His fate is truly in our hands and if we continue to ignore his needs alongside those of thousands of other children in C.A.R, we are tacitly condemning another generation.

I’ve heard it said that C.A.R. is a forgotten crisis, that Dieu’s world is just so far removed from our lives that we can somehow erase him from our thoughts. It’s as if Dieu’s misfortune is to have found himself growing up in a country that has no strategic importance to the rest of the world, in a place where he can be forgotten while his life quietly slips away.

I understand and appreciate that C.A.R is competing for media attention alongside the crisis in Syria, the disappearance of the Malaysian passenger plane and the myriad of other issues that jostle for our attention in our day to day lives. But Dieu is just one among a population of more than 800,000 people who have now been displaced by conflict in C.A.R and their needs are becomingly increasingly desperate. He is the tragic poster child for a population on the brink.

We have asked the outside world to help us come to the rescue of Dieu and the thousands of others affected by the crisis in C.A.R. Some have come forward to help, but it is simply not enough.

As I flew north from Bangui this week to visit WFP’s work in Bossangoa, I saw a rolling, fertile landscape unfold beneath me. Like so much of sub-Saharan Africa, there is huge potential in the soils of C.A.R. It is the potential to grow crops, feed the next generation and to turn C.A.R into a breadbasket for the entire central African region. But many of the farmers who should be planting seeds in anticipation of the arrival of the rainy season have now abandoned their fields and are sheltering in centres like the one where I met Dieu.

Ideally, we would like to be supporting these farmers, helping them to improve their crop yields and connecting them to vibrant local markets where their produce can be sold. Unfortunately, many of the markets have been abandoned and the farmers have fled. Instead of supporting agricultural growth, we are in a desperate struggle to save lives. Our biggest challenge right now is to pre-position food stocks across the country before the rains turn the roads into rivers of mud and leave our truck convoys stranded and the people without food.

We can do it, but we need the world to wake up to the plight of Dieu and thousands like him. Our window of opportunity is rapidly closing and we will all carry some of the guilt if we allow C.A.R. to evolve from a forgotten crisis to a neglected tragedy.