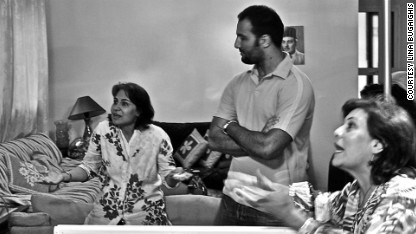 Libya was her country and she refused to stop fighting for the vision of a Libya that we had not even dared to think of before February 2011.

There are a thousand words that come to mind when trying to capture the feelings provoked by this egregious crime, but all of them combined do not come close to describing the hurt, pain, and confusion that is plaguing all of us – only reflecting the hurt, pain and confusion Libya is suffering. The Libya that our aunt Salwa believed in, and the Libya she gave her life to.

With every phone call, picture, news article, text, email, and memory, our sorrow, rage and indignation only grow deeper. We also wait to hear news of the fate of her husband, our uncle Essam Gheriani, who was kidnapped at their family home on the evening of Salwa’s murder.

We think back to June 2011, when we returned to ‘Free’ Libya for the first time. We rediscovered our hometown – not only by walking the streets of Benghazi, but through the stories our family recounted. We sat down with our aunts Salwa and Iman, along with the rest of our family, listening to them passionately describing what we, like the thousands of Libyans living abroad, had followed by absorbing any detail a media outlet would provide. They spoke about how the revolution that had come to life started out as a protest at the Courthouse in northern Benghazi. It is with this same energy and dedication that we remember her today.

The last time we saw Salwa was in March of this year, in Washington DC. She had just spent a week in New York attending the annual session of the United Nations Commission on the Status of Women. She was still just as passionate and committed to the fight for a better Libya as she had been in the first days of the revolution three years earlier, not knowing that her actions and those of her colleagues, family, and friends would change the face of Libya forever. When we asked her if she had thought of leaving the country for some time, like many of her fellow countrymen and women, or whether she ever considered taking a back seat while things seemingly unraveled for the worse, she answered, “How can I do this? I was there from the beginning – this is what I believe in! I will continue until the end.”

For decades, generations of Libyans had given up on the idea of ever feeling proud of being a Libyan, and had lost the taste of what loving one’s own country meant. Children, young women and men failed to understand the seemingly inexplicable bond that our mothers and fathers cherished and preserved with their homeland, even throughout years of exile. It is through people like Salwa that we learned how to love our country.

Salwa believed in a better future not only for her family and children, but for all her fellow countrymen and women. For the Libyans that she had never met and would never meet; from those who respected her to those who tore her ideals apart. She believed that every Libyan deserved a chance to have a smile on their face. She believed that every person deserved, as a human being, to lead a dignified life.

Salwa had returned to our hometown of Benghazi, despite the threats that she had recently been subjected to, to cast her vote in the country’s parliamentary elections, and to encourage others to do the same.

Her love for Libya was immeasurable, and her dedication and resilience was relentless and inspiring for thousands in the country and around the world.

She is still here with us – there is no past tense when speaking of our heroes. Her legacy lives on, and her work for a democratic, peaceful, and tolerant Libya will be kept alive until it is fully achieved. She was strong and powerful not only because she had a vision, but also because she inspired, mobilized, and awakened the most beautiful aspirations in all of us.

Salwa Bugaighis was murdered, but we have long understood that the whole is greater than the sum of its parts. The Libyan revolution, this hungry and irreversible desire for change, has not died. And Salwa, like many other martyrs – celebrated and unsung – has paved the way ahead for us and we will not stop until our children and grandchildren wake up to a safe, free, and democratic Libya. She was taken away from us, but she will live on eternally in our hearts and in the legacy she has left behind. However deep the bullet or sharp the blade, it will never kill our dreams and aspirations.

In the words of the late Mohamed Nabbous, a Libyan patriot who preceded Salwa to martyrdom – I am not afraid to die, I am afraid to lose the battle.

And we will not lose the battle.