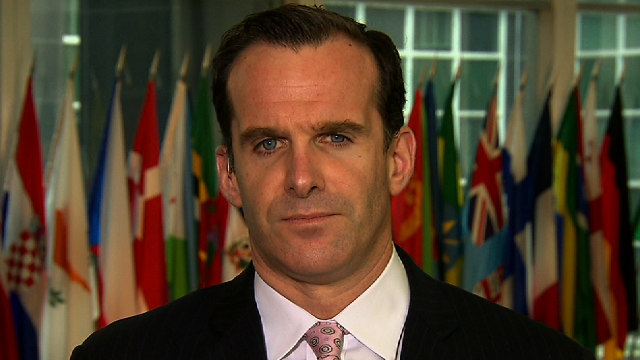 As ISIS released a video Tuesday showing the beheading of a second American, a top State Department official told CNN’s Christiane Amanpour to “stay tuned” on U.S. plans to combat the organization.

The executioner says the U.S. is “paying the price” for intervention, in the form of airstrikes, against ISIS; he threatens the life of a British captive.

The U.S. says it is working to authenticate the video.

“We need a comprehensive, global, regional, and local approach, which we can then help enable. We can’t just come in as the United States and do this on our own; that would be counter-productive; that a lesson we’ve learned over the last decade.”

Despite the authorization of airstrikes against ISIS in Iraq – including a successful operation just this weekend – President Obama has drawn criticism for not acting more boldly, including from some in his own party.

Democratic Senator Dianne Feinstein, who chairs the Senate Intelligence Committee, told NBC this weekend, “I think I’ve learned one thing about this president, and that is he’s very cautious. Maybe in this instance too cautious.”

President Obama drew elicited surprise and criticism last week when he said “we don't have a strategy yet” to combat ISIS.

“I think President Obama has shown,” McGurk said, “that when organizations do these types of things to American citizens, they do not go unanswered.”

He told Amanpour that President Obama will focus on the issue during a NATO summit this week in Wales, and he will chair a special session of the U.N. Security Council in New York later this month.

“When I say ‘stay tuned,’ I don’t want to suggest that we’re sitting idle. There have been over a hundred airstrikes in Iraq over the last few weeks, and those orders very much remain in place.”

“We are over the skies of Iraq, we are actively watching what ISIS is doing, and we are taking targets as they become available, within the mission that the President thus far has authorized. And we are building now a broader campaign plan that we’ll develop over the days and weeks ahead.”