The U.S. special envoy to the Democratic Republic of Congo, Russ Feingold, said that while the decision by M23 rebels in that country to lay down their arms against the government is a “hopeful moment,” it is far from the end of the road.

“It would be a great over-simplification to call this important step the end” of Congo’s hardship, Feingold told CNN’s Christiane Amanpour.

“Some five to six million people have died in this conflict over the last 20 years,” he said from Johannesburg. “There are dozens of armed groups involved; there are complex issues involved in the countries in the region. We need a broader political dialogue to resolve that.”

The M23 has been fighting the Congolese government for nearly two years. On its website, the group announced that it would "pursue, by purely political means, a search for solutions to the profound issues that led to its creation."

“What has happened here is not simply the M23 rebellion saying that they’re going to have a ceasefire, or cease for a while,” Feingold said. “They have formally renounced their rebellion.”

END_OF_DOCUMENT_TOKEN_TO_BE_REPLACED

One of the deadliest countries on earth may be on the cusp of peace its prime minister told CNN’s Christiane Amanpour on Monday.

Nearly four million people have been killed in the Democratic Republic of Congo since war erupted in 1998. A brief lull brought some calm until a rebel group called M23 launched a rebellion in resource-rich Eastern Congo last year and subsequently took over the city of Goma.

“It's a big ‘no’ on the issue of saying that I am accepting this kind of responsibility,” Kagame told Amanpour. “But what I am accepting is that people can work together to find a solution to this problem that affects Rwanda [and] also affects the Congo.”

Prime Minister Ponyo said that the DRC takes the U.N. accusations aimed at Rwanda at face value. “It's not only the DRC that says it, even the United Nations says so,” adding that the alleged interference is an obstacle for achieving peace.

He also emphasized that the DRC President Joseph Kabila cannot restore peace overnight given that war has torn apart the DRC for more than a decade.

Prime Minister Ponyo is currently in the United Staes to pursue further diplomacy at the U.N. and in Washington, D.C.

READ MORE: Rwanda’s President Kagame: ‘We have a problem’

(CNN) - Actor Ben Affleck on Monday launched a grassroots initiative to assist communities ravaged by war in one of the most troubled places on earth, the Democratic Republic of Congo.

Affleck, who just returned from a trip to the DRC, told CNN's Christiane Amanpour that he had long heard about the crisis in Congo, which has left more than 5 million people dead over the past 12 years, but only came to understand the scope of the humanitarian crisis after repeated visits to the country.

"The more I traveled, the more I was struck about it, the more I fell in love with the people, the more I was horrified by what was happening. And the more I did, I started to develop this idea of partnering with the Congolese people and wanting to empower community-based organizations there that were doing extraordinary work," Affleck said.

Affleck on Monday announced the launch of the Eastern Congo Initiative, an effort to support community organizations working to help rape victims and to rebuild from a decade of war.

"There are folks who are working to protect those who are suffering from gender-based violence, who help child soldiers to advance the educational needs of the citizens there." Affleck told Amanpour. "There are people who live in the communities, who are from there, who understand the relationships there, who are Africans finding solutions to African problems. And when I was there, what I saw was that those were, in my view, the most effective folks at meeting those goals."

One of those groups, Affleck said, was an organization known as LAV, the French acronym for "Let Africa Live," which taught practical trades, such as carpentry, auto mechanics and textile production, to reintegrate both former soldiers and victims of the violence back into society.

Affleck cited the case of one woman whom he met on his trip last week. She had survived a horrifying ordeal at the hands of a militia in Eastern Congo.

"They, in her words, treated her like an animal and a slave. She was a bush wife to six men who raped her. She became pregnant. She eventually escaped by asking basically permission to take a bath and making a mad run for it," he said. "She barely escaped with her life. She walked for a week and made it back to the city. She was homeless, pregnant, and destitute in the city. She was discovered by folks from (LAV). They took her in. They brought her into this community."

Through the work of LAV, the woman is now attending to law school, with plans to practice and teach law, Affleck said.

"She's an extraordinary woman, and (LAV) was the kind of group that we want to partner with and support so that we can broaden their capacity to do more."

Congo analyst Jason Stearns, who worked in Eastern Congo's war zones with the International Crisis Group and the United Nations, said the problems in Congo could be traced to two sources: the ongoing after-effects of the 1994 Rwandan genocide and the collapse of the Congolese state.

"We're not going to have a solution to the problem - and to the rapes, for that matter - until we have a Congolese state and army that serves the people, rather than preys on the people," Stearns said. "Four billion dollars is currently the amount the international community gives to the Congo for various things, and they've done a great job in emergency stuff, in feeding displaced people, but really a very poor job in reforming the state institutions that would prevent such a crisis in the future."

Congolese human rights attorney Sylvie Maunga Mbanga said the government needed to focus attention on ending a culture of impunity towards rapists, especially when those rapes are committed by members of the Congolese army.

"We need to punish the perpetrators of sexual violence against women," she said.

Eastern Congo may have received far less international attention than the crisis in Darfur, but Affleck called on Washington to do more to address the humanitarian situation in the DRC.

"The United States really needs to develop a comprehensive policy towards Congo as a whole, much in the same way it did toward Sudan in late 2009, which it doesn't have toward Eastern Congo, despite what a sort of mess the place is," Affleck said. 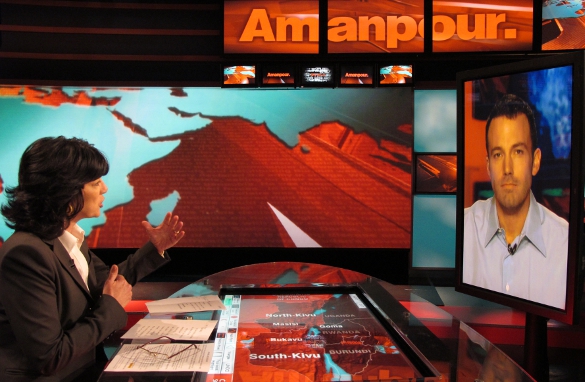 Searching for common ground in Congo

I’m writing to you from Goma, eastern Congo, with a perspective that I think we hear too infrequently. It’s about recovery, and giving people a chance to find solutions to their problems.

For the last five years I have lived and worked in the DR Congo, heading an NGO called Search for Common Ground (SFCG). Although we do not give out bricks or buckets or biscuits, our work enables us to give people a chance to reflect on what’s really going on around them, to have access to accurate information, and a chance to shift towards a more positive change.

You’ve all heard about the crimes committed by the Congolese army. SFCG has reached out to that same army, and we have found within it thousands of soldiers who are fully committed to working day after day towards transforming this army to become one which protects, not persecutes, civilians. We’ve equipped them with participatory tools to work within their units to combat rape, extortion and abuse of civilians. They know that it’s up to them to push back the tide of impunity and regain the respect of their compatriots. They want to be positive agents for change, given a chance to define a positive role.

We also work with actors and train them in conflict transformation, and equip them to go around from village to village in areas where refugees are returning from years of war. The actors aren’t there to tell people what to do, but rather to listen. Then, they reflect back the conflicts the community is experiencing through drama and you know what? The people in the community have all the answers about what should happen.

One often blames the government of the DRC for its perceived lack of engagement in building peace and democracy. The culture of corruption is deep rooted, and it will take years of practice to be able to say no to bribery and yes to transparency. Fighting impunity and ensuring that the state pays its public servants can be hugely effective in turning the page towards stability.

And all those victims. What about them? Given a chance, they can transform themselves, all by themselves. With a pile of musical instruments, former child soldiers in Bukavu have become well known performers, welcoming into their ranks other youth in need of a warm corner and a song. They’ve become so strong that they reach out to those who look even harder for a streak of brightness: rape survivors. Every week, they take their music and drums up to the Panzi Hospital and leave behind smiles, hugs, rhythm and melody in the hearts of the women and girls.

And all those rapists, what about them? With a big screen, we take films around the villages and towns and enable people to talk about why there’s so much rape and gender-based violence. Not everyone agrees why, or what should be done. But the space accorded to talk about it, confront opinions with fact and customs with laws opens the door towards being open to change and transformation.

Congo is a tough place, and it’s easy to be discouraged. But Congo today is nothing like the Congo I can remember on the eve of the 2006 elections, or the deeply divided Congo that existed when I first arrived in the country in 2001. Recovery is happening, and the silent majority is pushing things in the right direction. Open new opportunities, give keys to people to make new choices, and they'll soon redefine themselves, not as victims, but as an agent for a better DRC for tomorrow.