Had we been warned, many of us would not have gone to Auschwitz, says survivor

On the day the world marked seventy years since the liberation of Auschwitz, survivor and Nobel Peace Laureate Elie Wiesel told CNN’s Christiane Amanpour that had many Hungarian Jews been warned about the death camp, they would never have gone there in the first place.

“[In] 1944 we didn’t know Auschwitz existed. Had we known, believe me, had Roosevelt, had Churchill, on the radio stations turned to Hungarian Jews saying ‘Hungarian Jews, don’t go to the train, because the trains will lead you to Auschwitz,’ people – many of us would not have gone.

Born in Romania, Wiesel was fifteen when he was sent to Auschwitz in Poland with his family in 1944.

END_OF_DOCUMENT_TOKEN_TO_BE_REPLACED

Germany’s Interior Minister admitted some difficulty in reaching some parts of society, but pledged to fight against a new type of anti-Islam movement that is sweeping across the country.

“We and others and the media we have problems to reach some parts of our society and I think this is the case in other democracies as well,” Thomas de Maizière told CNN’s Christiane Amanpour on Monday.

Germany has been rocked by a wave of anti-Muslim demonstrations and concerns about a resurgence of right-wing nationalism, with the protest group “Patriotic Europeans against the Islamization of the West” (PEGIDA) gathering tens of thousands of supporters in recent months.

The Minister pointed out that “it’s very interesting that the organizations of PEGIDA they know exactly where is the red line which they should not cross, which makes me more sceptical, but they know where the taboos are in Germany though I don’t see a renewal of the NPD or other parties."

"It’s less than in other European countries and we are very well aware of it and we will fight against every tendency.”

END_OF_DOCUMENT_TOKEN_TO_BE_REPLACED

Trust between the two countries has fallen to dangerous lows as new allegations emerged that the U.S. recruited a spy inside Germany’s secret service.

Berlin has since ordered the top U.S. spy in the country to leave – the first time a close American ally has expelled a CIA station chief.

Getting caught now is particularly embarrassing for the United States, which had been under pressure to repair relations with Berlin after it was revealed last October that the U.S. had tapped Chancellor Angela Merkel’s mobile phone.

END_OF_DOCUMENT_TOKEN_TO_BE_REPLACED 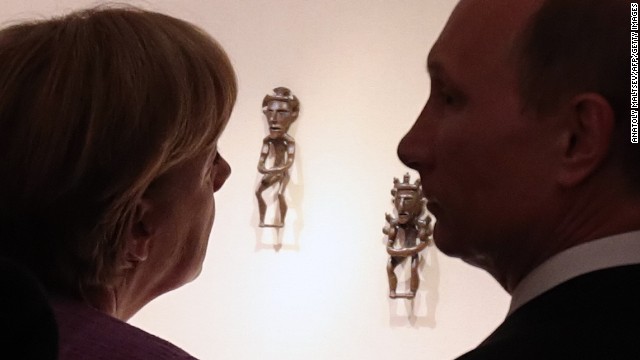 END_OF_DOCUMENT_TOKEN_TO_BE_REPLACED

Germany says it could live without Russian gas

“If the Russians would stop the gas supply for us, or we would raise sanctions on the oil and gas sector, we will be able to have in the interconnected and linked European energy market – of course with higher prices – the energy supply for Germany.”

Germany has a stockpile of coal it could tap, Missfelder said, admitting that such a move would impact the country’s climate change goals.

But “for the political calculation, it’s good to know that we are independent from Russian gas.”

END_OF_DOCUMENT_TOKEN_TO_BE_REPLACED

“I understand that it is necessary to fight against terrorism,” he said, “but you cannot fight terrorism by taping the Chancellor’s cell phone.”

When asked if Westerwelle believed that his own phone was being tapped, the foreign minister demurred.

“I cannot exclude it,” he said.

END_OF_DOCUMENT_TOKEN_TO_BE_REPLACED

For Germans: War and conscience

Public appearances by top German officials at mourning ceremonies for slain soldiers have become a sad new phenomenon in the country. Last weekend both Chancellor Angela Merkel and Defense Minister Karl-Theodor zu Guttenberg were on hand as the military and public bid farewell to four men killed in battle in Northern Afghanistan a little over a week ago. In his eulogy Guttenberg said, “it is in these times that we must ask you, the relatives of those who were killed, for forgiveness.”

It is the second time this month that Merkel and Guttenberg have had to attend such a ceremony. On April 2nd three German soldiers were killed in small arms fire in Kunduz province, then on April 15th four more died when their vehicle was attacked in Baghlan province during a patrol. The attacks came at a time when public support for Germany’s mission in Afghanistan are at an all time low, with up 70 per cent calling for a fast withdrawal from the country.

Researchers like Jan Techau from Germany’s Council on Foreign Relations believe politicians have long tried to avoid a debate on the use of military force in the country and now those lapses are catching up with them.

Techau and many others believe that psychological predisposition stems from Germany’s past, starting World War II, the crimes committed during the holocaust, and finally the total defeat. It has led Germans to become staunch pacifists, Techau says, who like their military but have never been prepared for the reverberations of the army’s actions in war zones.

Thus many of the German soldiers who are serving in Afghanistan feel a distinct lack of support from their population.

"The lack of support really worried me in the beginning, but now I have decided I want to go to Afghanistan, I don't need anyone's support, I don't care what other people say." That is what Norman, a German soldiers about to deploy to Afghanistan, whose full name we cannot print because of the army’s security policy told me shortly before deploying to Kunduz, the most dangerous area in Northern Afghanistan where Germany is leading NATO’s efforts. In the face of waning public support, Germany only pledged some 500 additional soldiers, as well as a reserve of some 350, late last year when the U.S. asked countries participating to increase their troops levels in support of ISAF commander Gen. Stanley McChrystal’s new partnering strategy, which saw America commit some 30 thousand additional soldiers.

Germany’s Defense Minister zu Guttenberg told CNN he knows he needs to do a better job of selling the mission to the public.

"We are trying to explain to our population what they are doing there, why they are doing it and what the key elements in Afghanistan are. It's quite important to be frank and clear and blunt."

According to Jan Techau from the Council on Foreign relations, German politicians need to start being more honest with their population now, otherwise the debate on German military power will come to them as casualties mount. Defense Minister Guttenberg made a start at the ceremony for the killed soldiers last weekend.

“In this day and wage we need to understand that more Germans will be killed abroad in Afghanistan and elsewhere,” he said speaking in a church in Ingolstadt in Bavaria.

The week before German Chancellor Merkel held a speech in parliament where she acknowledged the lapses of the best but also made a commitment not to leave Afghanistan unilaterally.

“The international community went into Afghanistan together and we will leave together. We won’t stay longer than necessary but we also won’t stay any shorter.”

German politicians have said the new strategy in Afghanistan which sees NATO soldiers partnering with Afghan units to conduct military operations and will see the expansion of foot patrols rather than riding in safer mine proof vehicle will mean more German soldiers will be harmed. At the same time the country is now realizing that for years it hasn’t adequately supplied its forces in Afghanistan with the gear they need to survive. In all of Afghanistan the German military has only eight transport helicopters and no gun ships. Meaning the troops have to rely on the U.S. army in case they get involved in heavy fighting.

This was the case on April 2nd when German soldiers were pinned down by insurgents in Kunduz and several wounded were medevaced out of the area by American helicopters as the Germans did not have adequate capacities of their own.

Last week the German Defense Minister presented Gen. McChrystal with medals of honor for the U.S. soldiers who risked their lives to save the Germans. Guttenberg acknowledged the Germans need to upgrade their soldiers’ capabilities. A difficult task at a time when most Germans want to see their soldiers leave the country as soon as possibly.