Why I wanted to interview Angelina Jolie

Angelina Jolie puts her money where her mouth is, in terms of care and concern and in terms of people in crisis beyond the United States.

I was gratified that so many people said to me they had never seen this side of Angelina.

She arrived with no hair and make up, but beyond that had a command of the issue and obviously deeply cared.

To watch the podcast of my interview with Angelina Jolie from Haiti, click here: http://itunes.com/amanpour or to watch the episode directly click here.

Angelina Jolie tells me about meeting Haitians injured and displaced in the earthquake for this week’s show.  She told me she was hit hardest an by injured boy in the street – hope you'll join us for our conversation.

Haiti: Between death and life

Watch Peter Turnley as well as Angelina Jolie on her work in Haiti on "Amanpour," CNN International, Friday, Saturday, Sunday and Monday. In the U.S., the show appears on CNN, Sunday at 2 and 5 p.m ET.

(CNN) - World-renowned photographer Peter Turnley traveled to Haiti after the earthquake to document the lives of people burying their dead and trying to rebuild.

In an exclusive interview with "Amanpour," Turnley - whose photographs have appeared on the cover of "Newsweek" more than 40 times - talks about the extraordinary moments and emotions he experienced.

He was in the morgue with a man searching for the body of his son, and in the hospital to see a mother's first minutes with her newborn.

Fluent in French, Turnley was able to connect personally with the people he photographed.

"What I was seeing was a country and a people between life and death," Turnley said. "They weren't having any sense that this was going to be easy... I hope the world and the journalistic community will continue to come back to this story for a long time to come."

Turnley has covered earthquakes and conflicts around the world, as well as the fall of the Berlin Wall and the aftermath of the 9/11 attacks.

Jolie on adopting in Haiti

Angelina Jolie tells me about meeting Haitians injured and displaced in the earthquake for this week’s show.  She told me she was hit hardest an by injured boy in the street – hope you'll join us for our conversation. 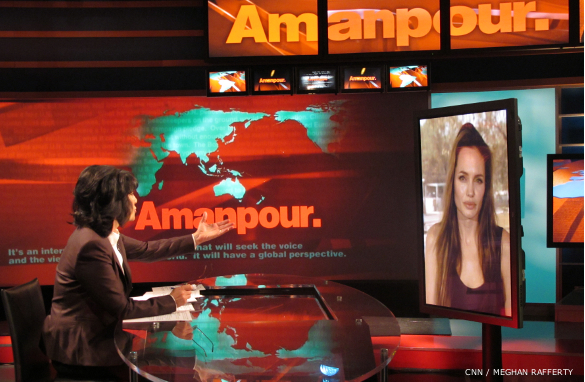 Angelina Jolie tells me about meeting Haitians injured and displaced in the earthquake for this week’s show.  She told me she was hit hardest an by injured boy in the street. She talks talks about it on our Friday show at 2100 CET and this weekend on CNN in the U.S. at 2pm EST & 5pm EST.

On my way home from Haiti 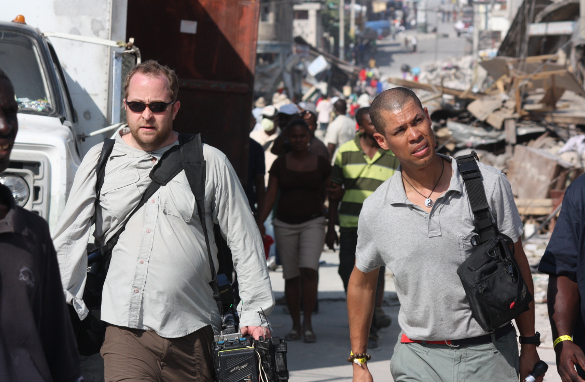 I am on my way home now.

As I prepare to leave Haiti, my mind drifts to the people I've met:

Bea, the young girl pulled from the rubble hours after my arrival. Monley, the five year-old boy rescued after eight days trapped under his home with his dead father at his side. The overworked and haggard but inspired doctors and nurses who worked on him long after his release.

The hundreds of international volunteers and rescue teams led by heroes like Pat Rohaley of the LA County Fire Department. I think of the  things I have experienced, seen, heard and felt. Hope when I heard a cry and a faint banging in a collapsed daycare, and helplessness after telling a young mother that the search for her child was being called off even as she looked to her faith for deliverance. I've seen homes pancaked and bodies by the hundreds, and I've seen Haitian men, women and children pitch in with whatever meager tools they have to dig out neighbors and strangers alike.

I've heard the screams of terror and the pitiful cries to God in the wake of bone rattling aftershocks and I've heard joyful singing and jubilant bongos in praise of Him. And it was in those moments that the tragedy of the earthquake became visceral.

The defiance of Haitian people in the wake of unspeakable tragedy, the shaking of their fists in the face of suffering. Their homes destroyed, their families decimated, they still rage against the dying of the light.

This country, born of the blood of slaves against the superpower of the 19th century, and tempered by years of turmoil and political upheaval, will go on. Not because they are resilient but because they must.

Winston Churchill once said, "We shall draw from the heart of suffering itself the means of inspiration and survival." Haitians have known that since 1804. They are survivors and they will survive together. After all, it's an ideal emblazoned on their flag: "le union fait la force."

To chronicle all of Vlad's updates from Haiti click here.

(CNN) -  There is trafficking in children and human organs in the aftermath of the earthquake that devastated parts of Haiti, killed more than 150,000 people, and left many children orphans, Haitian Prime Minister Jean-Max Bellerive said Wednesday.

"There is organ trafficking for children and other persons also, because they need all types of organs," Bellerive said in an exclusive interview with CNN's Christiane Amanpour.

He did not give any specifics, but asked by Amanpour if there is also trafficking of children, Bellerive said, "The reports I received say yes."

Haiti is trying to locate displaced children and register them so they can either be reunited with other family members or put up for adoption, Bellerive said.

But, he said, illegal child trafficking is "one of the biggest problems that we have."  Many groups appear to be legitimate, "but a lot of organizations - they come and they say there were children on the streets.

They're going to bring them to the (United) States," he said.