Chinese authorities were just as bewildered by North Korean Kim Jong-Un’s mysterious absence from public life as the rest of the world, a former Chinese ambassador who now advises the Foreign Ministry told CNN’s Christiane Amanpour on Wednesday.

After remaining out of the spotlight for over a month, Kim Jong-Un made an equally mysterious reappearance and offered no explanation for his prolonged absence. Wu said he found the 32-year-old leader “quite mysterious”.

“The Chinese leader has had no direct contact with him apart from the vice president, Yuanchao. He went to Korea, he met with him, and Xi Jinping had no meeting since,” he said.

Wu has previously served as ambassador to France and the United Nations in Geneva. He now sits on an advisory panel for the foreign ministry, and is an associate at the London School of Economics' "IDEAS" program.

END_OF_DOCUMENT_TOKEN_TO_BE_REPLACED

Who controls the Hermit Kingdom?

According to a North Korean defector – a former regime insider who was one of Kim Jong Il’s favorite poet-propagandists – it is not the 31-year-old dictator Kim Jong Un.

“When Kim Jong Il died and Kim Jong Un succeeded him, people saw the transfer of power from father to son,” Jang Jin-Sung told CNN’s Christiane Amanpour in London. “What they did not see also was what happened to the apparatus of the totalitarian system that supported the rule of Kim Jong Il.”

That apparatus, Jang said, is the Organization and Guidance Department, or OGD – it was Kim Jong Il’s education as he rose through the ranks, and was full of his university friends.

It is an “old-boy’s network” made into a massive surveillance organization.

“Kim Jong Il had the OGD as his old boys' network,” Jang told Amanpour. “Kim Jong-un may have friends in his Swiss school, but he has no one inside North Korea.”

Jang is the author of a new book, "Dear Leader: Poet, Spy, Escapee – A Look Inside North Korea."

“After the execution of Jang Song Thaek [Kim Jong Un’s uncle], he has become an orphan – not just in terms of family connections, but in terms of politics.”

END_OF_DOCUMENT_TOKEN_TO_BE_REPLACED

Another North Korean nuclear test is “quite likely” in the “not-too-distant future,” a veteran former American diplomat told CNN’s Paula Newton, in for Christiane Amanpour, on Tuesday.

“They’re well along on this path of theirs to the development of nuclear weapons, and testing is an important feature of that program. So I expect there will be another test in the relatively near future,” Stephen Bosworth, former U.S. ambassador to South Korea and former special representative for North Korea policy, said.

South Korea’s Defense Ministry warned on Tuesday that the North has stepped up activity at its main nuclear test site, possibly preparing to carry out a fourth underground blast.

The reclusive regime in Pyongyang is known to have conducted three previous tests, all of them believed to be based on plutonium. The most recent one took place February 2013.

“At some point, as their missile program continues to develop and their nuclear weapons program continues, they will reach a point where I think we will all conclude they are a very grave threat to regional stability, and indeed to nuclear non-proliferation,” Bosworth said.

Recent experience shows, the former diplomat told Newton, that the “one way that we have of at least slowing them down, or gaining some additional time, is to engage with them.”

END_OF_DOCUMENT_TOKEN_TO_BE_REPLACED

Is there something in the water?

Suddenly peace, or at least peace talks, are breaking out in the most unlikely places. In Asia, entrenched enemies – China and Taiwan, North and South Korea – have agreed to sit down at the table.

In an effort to decode the surprising developments, CNN’s Christiane Amanpour spoke on Tuesday with Kurt Campbell, former U.S. Assistant Secretary of State for East Asian and Pacific Affairs, who is widely credited with being the key architect of America’s “Pivot to Asia.”

China and Taiwan are holding their first-ever official face-to-face talks since Mao Zedong’s communists won their civil war in 1949 – a “quite significant” turn of events, Campbell said.

“Over the course of the last 30 years, people thought that the most tense situation in Asia was between China and Taiwan, but in recent years the relationship has improved substantially – commercially, economically, and now politically.”

END_OF_DOCUMENT_TOKEN_TO_BE_REPLACED 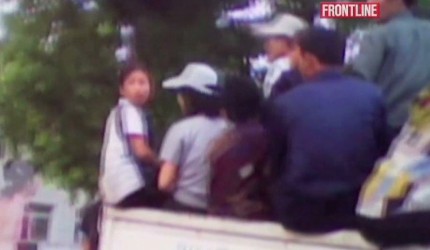 END_OF_DOCUMENT_TOKEN_TO_BE_REPLACED

In North Korea, ‘nobody is safe’

The world's most unlikely lone-ranger diplomat, Dennis Rodman, has gone to North Korea for his third visit.

This time, he is there to prepare for "the big bang from Pyongyang" - an upcoming basketball extravaganza between North Koreans and former NBA stars, for leader Kim Jong Un's birthday.

Rodman is clearly undeterred by the shocking news this week.

How to decipher what’s coming next...?

As the former British ambassador to North Korea, John Everard knows the Hermit Kingdom better than almost any other Westerner.

“They'll all be thinking, if Jang Song Thaek can be removed from power and executed, then nobody is safe,” he told Amanpour.

Former diplomat: China has just about had it with North Korea

China has long been North Korea’s strongest ally, but the alliance might be based on nothing more than nostalgia.

In an interview with CNN’s Christiane Amanpour on Tuesday, Campbell said that North Korea will be at the top of the agenda for U.S. President Barack Obama’s upcoming meeting with China's new President Xi Jinping, along with the issue of cyber security.

Campbell thinks Obama might have success on both fronts, not because of “great goodwill” between the U.S. and China, but mainly because he sees China “poorly positioned” on both fronts.

“People sometimes believe that there's a warm, flourishing relationship between North Korea and China,” Campbell said. “I don't think that's the case. In fact, I think the relationship is based more on a nostalgia for the Korean War and the long association of political parties.”  END_OF_DOCUMENT_TOKEN_TO_BE_REPLACED

A 1998 report looks at how relations between the U.S. and North Korea affected the dreams of the world's tallest man at the time.

How to contain Kim Jong Un

A nuclear conflict on the Korean peninsula could make the Chernobyl nuclear accident look like a “child's fairy tale” – that was the warming that came on Monday from Russian President Vladimir Putin.

After weeks of nuclear threats from North Korea, there is no evidence that North Korea is planning an imminent nuclear test.

But South Korea and the United States both say they would not be surprised if the North launched a missile later this week.

Whether that would be a hostile act or a test is anybody's guess. That’s the problem; very little is known about the new North Korean leadership and Kim Jong Un's intentions.

Gary Samore was President Obama's top nuclear adviser up until January. He also played a key role in the Clinton administration’s negotiation of an agreement to stop North Korea’s nuclear program.

“The North Koreans may very well launch another missile or conduct another missile test,” Samore told CNN’s Christiane Amanpour. “But I think most of their threats to take military action are probably just theatrics – designed to intimidate and frighten people.”

In other words, Samore believes the North Korean will do something, but more likely it will be some type of test. He said that has certainly been the pattern in the past.

Samore believes that South Korea and/or the United States have to send North Korea’s young leader a “warning message” for him to know he must not go too far, but send this message without provoking him. At the same time, Samore said the North Koreans must be careful not to alienate China, their ally, which sends essentials supplies across the border.

In the video above you can see Amanpour’s entire interview with Samore.